(Cross-posted from Talking Math with Your Kids)

Two and a half years ago, I was developing Which One Doesn’t Belong? (before Stenhouse had signed on to publish it). I went on a tour of elementary classrooms to talk with K—5 students all around the Twin Cities about these collections of shapes. I learned a tremendous amount of course, and much of that learning went into the Teacher Guide (which Stenhouse convinced me needed to exist).

I learned a lot, and I also noticed something.

Most of those classrooms had some form of shapes posters on the walls. Triangles, rectangles, squares, and rhombi were proudly and prominently displayed so that students would be surrounded by correct geometry vocabulary. Most of those shapes posters had something important (and unfortunate) in common with the shapes books in the school library and in the children’s homes.

There were rarely squares on the rectangle poster. All of the triangles were oriented with one side parallel to the ground, and most of them were equilateral. Sometimes the shapes had smiley faces. You and I know that a triangle is still a triangle, no matter its orientation. I can assure you not all elementary school children know this. While the vocabulary is good on your standard shapes poster, the math is not. (I decided not to link to examples—you can do your own search and report back if you find my claims exaggerated.)

This summer, Stenhouse is helping all of us to fix this. You can now preorder Which One Doesn’t Belong? shapes posters. 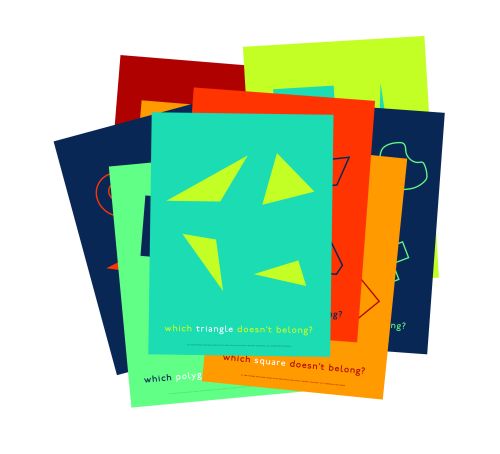 They come as a set of eight, with an insert in the spirit of the Which One Doesn’t Belong? Teacher Guide to help you facilitate student thinking and classroom conversation as they hang in your classroom.

So as you plan your back-to-school classroom organizing and decoration, I hope you’ll consider making space on your walls for these posters. And I definitely hope you’ll share your students’ ideas here and on Twitter.

I recently put out a call for K—2 classrooms in which I could talk shapes with students. As a result each of the next several Mondays (Presidents’ Day excluded), I will be in a different early elementary classroom somewhere in the Minneapolis/St Paul metro area.

Last week I was at two schools: Dowling in Minneapolis and Echo Park in Burnville. I talked with one kindergarten class, three first grade classes and four second grade classes. I have learned a lot.

Young children find composing and decomposing shapes to be much more compelling than adults tend to. They nearly all saw the bottom-right figure here as being a square and four circles. Adults can see that, of course, but we are more likely to think “not a polygon”.

On that note, I am now quite certain that we spend way too much time having young children sort polygons from non-polygons. That bottom-right shape has many more interesting properties than that of not being a polygon.

For example, a class of second graders on Friday were variously split on the number of “corners” that shape has. Is it 0, 4 or 8? Second graders can understand each other’s arguments for and against these possibilities.

These arguments can lead to the reason that mathematicians use vertex instead of corner. “What exactly is a vertex?” is a much richer and meatier mathematical question than “How many vertices does this shape have?” But if that latter question only comes up with respect to convex polygons, then it is unproblematic and not interesting for very long.

So imagine for just a moment that the lower-right figure has 8 vertices (and it wouldn’t be too difficult, I now believe, to get a classroom full of second graders to agree to this perspective, whether it agrees with the textbook definition of vertex or not).

Now kids can work on stating exactly what makes a vertex.

And what makes a vertex is going to be awfully close to what makes a point of non-differentiability (large point at apex of figure below). 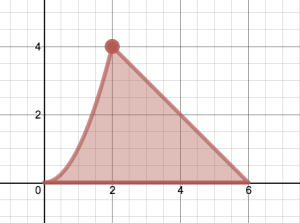 I’m telling you: in twenty minutes with second graders, we can get very close to investigating things that are challenging for calculus students to describe. My point is that second graders are ready to do some real mathematics, and that sorting polygons from non-polygons is not the road to it.

Other things I found interesting:

• When kids give us something close to the answer we expect, it is easy to fool ourselves into thinking they understand. Example: on the page below, one boy said about the lower left shape that “if you tip your head, it’s a square.” A couple minutes later, it occurred to me that there might be more to the story. I asked whether the shape is a square when your head isn’t tipped, or whether it only becomes a square when you tip your head. He confirmed that it’s the latter. 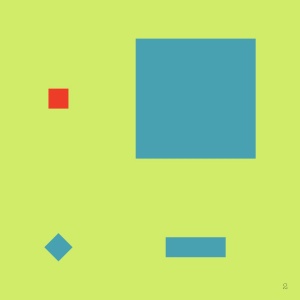 • Another second grade class was unanimous that the one in the lower right doesn’t belong because it’s not a square. When I asked “is the lower left now a square, or does it only become a square when you tip it?” the class was evenly split. This was surprising to both me and the classroom teacher.

• Diamondness is entirely dependent on orientation in the mind of a K—2 student.

• The 1:1 correspondence of sides of sides to vertices in polygons is not at all obvious to young children. I sort of knew this but saw it come up again and again in our work.

• A first grader said that the spirals below didn’t belong with all the other shapes we had seen that day because “you can’t color them in”.

Even the unshaded ones that had come before could have been colored in, you see. These spirals you cannot color in even if you try. What a brilliant and intuitive way into talking about closed figures—those that can be colored in.

Just a quick note here for the folks who are (a) not on Twitter and (b) not following Talking Math with Your Kids.

I created a shapes book for all ages. The digital version is free for now. Details are in this post over at TMWYK.

Posted in News, Talking math with your kids

The hexagons are here! [#nctmnola]

Forgive the delay. Here are pdf files of the hexagons we built for use in my hierarchy of hexagons lessons. You should be able to open and edit them in Adobe Illustrator. Consider them CC-BY-SA.

Shout out to former students Jen Carlson, Nadaa Hassan and Brenna Magnuson for collaborating on these.

Hexagons by Christopher Danielson is licensed under a Creative Commons Attribution-ShareAlike 4.0 International License.

Update: Below is the current complete set, with added hexagons from former students Ruth Pieper, Brandon Schwab and Mona Yusuf.

The hierarchy of hexagons, continued

In defining Bobs, Stacys, and the like, did you run into situations where your definition admitted shapes the students didn’t actually want. For example, once you defined a Stacey as a hexagon with three congruent acute angles, did you draw some other Stacys and have students blurt out “wait, that’s not a Stacy — that’s not what I meant!” If not, how did you privilege the *definition* over some sense of “I know a Stacy when I see one.” Is it because their definitions were based on some property they liked about one example, rather than trying to say what was the defining quality of some *group* of hexagons?

This instructional sequence is all about moving through the van Hiele levels.

An important learning goal for these lessons is for students to separate what it looks like from its mathematical properties. That means we need to talk about this very issue.

Early in the process, a central challenge is identifying precisely the property the student had in mind. This requires a use of language that can be unfamiliar and strange. Does “has a right angle” include rectangles, which have several right angles? Or did you mean “has exactly one right angle”? That sort of work comes first.

Then we look for other shapes that have this property. If those early-discovered shapes violate the spirit of the original intent, the student may object and will be invited to revise. If she wants to add another property, then I will usually suggest that this is a second class of shapes, and that the one she was really after is the combination of these two classes.

A “sally”? Good. From now on, a sally is a hexagon with at least one right angle.

Now this shape is both equilateral and a sally. Let’s give this special category of shape a new name.

That’s OK on day 1. Our goal on day 1 of the lesson sequence is to have a set of between five and eight named classes of shapes that have interesting interrelationships.

I need to be the judge of when we have enough, and whether they are of sufficiently interesting variety (I have screwed this up before). I reserve the right to add in some properties that I know will be interesting. For example, I make sure concave and equilateral make it into the mix somehow—either by student introduction or by my own.

After day 1, we need to move away from what things look like. We will be operating only on the properties as we have defined them. If we accidentally left ambiguities, we can plug those holes as clarifications. But these definitions cannot otherwise change. It is important to notice that shapes with very different appearances can share important properties.

It is important to notice that mathematical properties of shapes behave differently from the look of a shape.

For example, this semester we defined a class of hexagons this way.

A windmill is a hexagon with three acute angles and three angles greater than 180°.

The iconic windmill is this one. 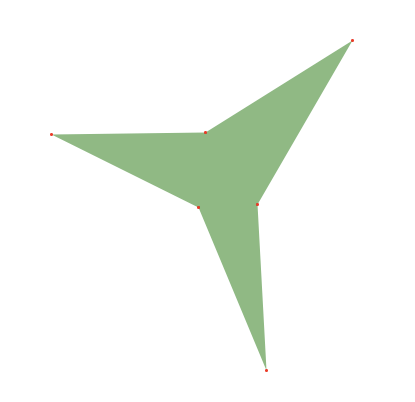 Much later, as we were in the process of trying to decide whether a windmill can be a utah (a utah is defined as a hexagon with two sets of three parallel sides), we happened upon this most un-windmillish object. 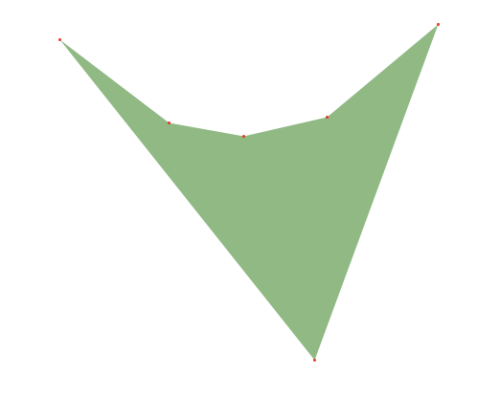 In trying to push the limits of windmill-ness, we started to consider shapes that had the right properties but that looked nothing like the original shape.

For what it’s worth, we have produced a proof—which some of us can reproduce and others cannot—that a windmill is never a utah. This proof depends on the Dani principle, which states that when two sides of a polygon are parallel and separated by a single side, then the two angles formed sum to 180°. This happens twice in a utah, which accounts for 4 angles less than 180°, leaving (at most) two possible angles to be greater that 180°, and thus a utah is not a windmill.

It should further be noted that the Dani principle needs amending to admit the possibility of angles that sum to 360° (when one of them is greater than 180°) or 540° (when they are both greater than 180°). And it should be yet further noted that standards for proof are socially negotiated in all areas of mathematics, and that we had become quite confident that these cases would not come up with a utah, thus the weak version of the Dani principle was good enough for our work.

Finally, if you have made it this far, you may be interested in the speculative origins of the hierarchy of hexagons. It has been a long road.

I will be presenting the hierarchy of hexagons at NCTM in New Orleans. Friday morning at 8:00 a.m. See you there?