A catering company rents out tables for big parties. 8 people can sit around a table. A school is giving a party for parents, siblings, students and teachers. The guest list totals 243. How many tables should the school rent?

This is a classic example demonstrating the danger of applying procedures without thinking. The quotient can be expressed either as 31, remainder 3; or as

. Neither of these answers the question, though. According to unspoken principles of table renting, we will probably need 32 tables.

Of course, I can imagine a student thinking like a caterer and building any of the following arguments:

I would argue that we need to teach in ways that do two things:

Yesterday’s post recounted a conversation with Tabitha (5) in which she asked for a “math class” problem. 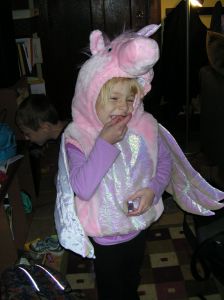 I focused the initial discussion on where she learned what constitutes a “math class” problem.

But there’s lots more in there that’s interesting.

It wasn’t just her affective response (rejecting the driving in a car context, asking for a naked number problem) that matters here. Notice the way she engaged with the two problem types.

When I relented and posed the question, What is two plus three? she guessed. I know that she guessed because she (a) took no time to process, (b) asked rather than told me her answer, and (c) it was wrong despite being within her grasp.

When I posed the exact same problem in a situation she could imagine (she and Griffy had been to the arcade just that day), she engaged quite differently. Her body position changed. She paused. Her fingers moved. Each of these is an indication that she was thinking. And when she had an answer, she stated it; she did not ask.

The central tenet of CGI and an important belief underlying the IMAP work is that children can use contexts to solve problems that they cannot solve abstractly. Here it is in action. 2+3 is meaningless to Tabitha right now. But her 2 tickets combined with Griffin’s 3 tickets? That’s got meaning.

The conclusion here is obvious, right? We start with contexts kids understand and can reason about (here, combining tickets). We move to the abstract mathematical representations (2+3). We don’t save arcade tickets for after the kid understands addition. We don’t wait for symbolic mastery before doing some applications.

What counts as a math question? (And how early do we set the tone?)

Griffin (7) and I had been talking math for a few minutes. Tabitha (5) wanted in on the action.

Tabitha: Ask me a math question.

Me: OK. You, me, Mommy and Griffy are riding in a car…

Me: You’re guessing…If you had 2 prize tickets at the arcade and Griffy had 3, how many would you have together?

Tabitha is five years old. She was in half-day pre-K, starting full day Kindergarten in the fall. This child has no personal experience with “math class”. And already, she has the sense that a question about a situation in her real life isn’t a math class question. There are two likely culprits here.

Tabitha loves her morning Arthur fix. Lots of school scenes there, and I haven’t watched too closely, but I’m guessing that modeling reform mathematics pedagogy is hardly top of the agenda for the writing team. 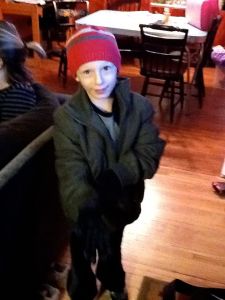 This boy looks all sweetness and innocence. But he’s learned what “math class” is from personal experience. And he holds tremendous influence in Tabitha’s world.

I get the last laugh. Notice that Tabitha objected that I was setting up a question that wasn’t a math class question. She didn’t claim I wasn’t setting up a math question.

I may not have gotten to teach these little guys’ math classes. But you better believe I’m their primary math teacher.

And parents? Each of you can be your kid’s primary math teacher. Talk math with them.

Does anybody at TI check the math?

I get that the images below are not real classrooms. These are combinations of staged and stock photos. I get that. But seriously, a waterfall with a straight-line cross-section? And just what answer do we expect to the “shade 1/6 of the hexagon” task? Is the resolution on that screen good enough to detect the difference between 1/4 and 1/6? And how will the teacher tell that difference at a glance? Do YOU know which of those responses is correct?

Note the right triangle on the NSpire screen. And the "Real-world" connection: "Diagonal distance of a waterfall".

We're filling from the bottom up. If height of hexagon is 1 unit, what fraction SHOULD we fill to? And how exactly do these images help me assess whether students can find it?

I wrote a while ago on the topic of word problems,

I will consider my career a success when my students no longer tell me that they are bad at (or good at) word problems.

And then I had the opportunity to meet Dan Meyer recently. He has written extensively on pseudocontexts, his word for the word problems I was railing against.

In that spirit, I need to get the following example off my chest, from a College Algebra text I no longer use.

We are supposed to set up a system of inequalities (“at most an additional 10 gallons of gas”) and solve with techniques of linear optimization.

But how could the answer be anything but, “Put as much as possible into the moped; put the rest into the car”?

And wouldn’t the problem be more interesting if Omar spent a few bucks on a gas can? Then some of his previous money goes to something other than gas, but buys more miles because he can put it in the moped.

And why must he spend all of his gas money at once?

And if he does have to do so, how is he getting both car and moped to the gas station at the same time?

And does that little yellow car really only get 20 mpg?

Posted in Opinion, The end of word problems

Caulfield on the End of Word Problems

Frazz, my current favorite comic strip, had a lovely series this week on the end of word problems. My favorite:

The end of word problems redux

Dan Meyer linked to and quoted from my screed on the end of word problems the other day. This led to some robust discussion on his blog, which I now take the opportunity to reply to.

the lion’s share of the difficulties isn’t the silliness of the problems, no matter how silly they are – it’s the illogical, poorly defined, and trite mental worlds that most folks live in! _That’s_ our challenge!

One of the most useful pieces of educational research comes from the folks at the University of Wisconsin. Cognitively Guided Instruction (CGI, about which I have written a couple of times) demonstrated quite definitively that young children think quite a bit about mathematics-especially early number concepts, and addition and subtraction. What they don’t do is think like adults. This they need to be taught. But it’s not “procedure first then word problems”. It’s “procedure is an abstraction that follows from students’ informal ideas that come from their interaction with the every day world”.

I tell the kids pure math is strength training for the brain. Just because you never do bicep curls while in a “real sports” situation, it doesn’t mean that doing those curls is irrelevant to your sporting ability.

This is such a tempting analogy but we really don’t have a shred of evidence that it’s so. What I learned from reading Thorndike, the godfather of transfer, is that practice on certain skills makes one better at those certain skills and on nothing else. We have never been able to demonstrate that learning thing A makes you better at thing B. Even so-called “near transfer” is unsubstantiated. What waldo points to is “generalized transfer”-a harder nut to crack and completely unproven to exist.

Now there are lots of other reasons to study pure mathematics. And I have no objection to the idea at all. Mathematics, like poetry, is a beautiful achievement of human intellect for instance. But the cans of peaches problem is not one from pure mathematics. And it’s not from applied mathematics either. It is a word problem. A clever little puzzle, to be sure, but not a useful representation of the subject.

The emphasis was intended to be on thinking, not on mathematically. Recall the Johnson quote was, “students having difficulty can learn basic procedures even if they are unable to reason out a problem.” I was objecting to the author’s satisfaction with getting students to apply procedures without reasoning (thinking).

Before 1500 or so, the science of math was developing at a snails pace. It was extremely hard to think about. So much so that people would have to travel to other countries in order to learn the arcane skills of multiplication and division. At this point, math and algebra texts were pretty much exclusively word problems; algebraic notion had not been invented yet. As the mathematical community began to develop the means of translating word problems into algebraic notation, math became way easier, and began to develop at a faster and faster rate.

It is absolutely the case that algorithms and memorized procedures free up the human mind to tend to other, more important matters. I have no issue with algebraic symbolism, nor with its use in K-12 classrooms. My beef is with curriculum that offers students little of intellectual value and little in the way of honesty about the actual uses of the subject.

Posted in Opinion, The end of word problems