This one is from the deep, deep archives.

When Griffin was five years old, he drew the picture below.

Me: Where did you learn about thirds?

Griffin seems to have absorbed a part-whole model for thirds that roughly matches how young children often think of halves.

Compare to his performance two years later. In that later conversation, Griffin was struggling to think about one-fourth of two. This pretty much matches a major argument in the book Extending Children’s Mathematics by a subset of the CGI research team. Their claim is that a part-whole fraction model is not very useful as the beginning place for thinking about fractions; that instead the extension of sharing division to complete and equal sharing involving remainders is a more natural place for beginning fraction instruction. See also Tootsie Rolls.

Another one from the archives.

About a year ago, Tabitha was doing a dot-to-dot drawing.

This is not the one she was doing. It is an example. Not a very good one, either.

Things were going well. She got to 11.

Tabitha (five years old at the time): I don’t know what twelve looks like.

With this tip, she cruised through the teens and got to 20.

There are a lot of interesting things going on in this exchange. Among them:

Sometimes in mathematics, we need to live with new notation before picking its meaning apart too carefully. See also fractions, functions and derivatives.

Numeration and number language do not develop hand-in-hand. Tabitha knows the number language; she can count past thirty. She has not learned how to read or write numbers that high.

Patterns are powerful tools in mathematics. Tabitha’s experience in the teens gave her powerful intuitions for the twenties.

Dessert is a good time to get the children’s attention for a little math talk.

A few weeks back, a smallish serving of M&Ms was about to be given to each child, from a large one-pound bag. 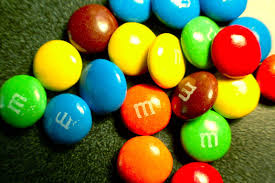 In keeping with my assertion that a day should never pass without asking my kids at least one how many? question, I asked Griffin to choose the size of the serving (but unbeknownst to him that this was the purpose.)

Me: I won’t tell you until you choose.

Me: OK. That’s how many M&Ms you each get for dessert.

Me: No. The first number I heard. That’s the one I’m using.

G: You should use the biggest.

Me: Nope. The first.

T: Next time, I should choose….thirteen.

This is beautiful, is it not?

I love the realization that things had not worked out for her maximal benefit. I love that she knows some thinking needs to be applied to the situation.

And I love dearly that the result of this thinking is an increase of a single M&M.

T: Oh. I should choose…nineteen.

My goal with most Talking Math with Your Kids posts is to demonstrate how easy it is to do this at home.

I do not pretend that the average parent is ready for the conversation I document here. This is graduate level parental math talk. I’m just showing off here. Sorry about that.

But I do hope what comes across is the pure joy of a child exercising her mind. The video runs five minutes. I promise it’s worth your time. Transcript with commentary follow. [Link to video]

Here’s the set up.

Tabitha was playing around with it one day and declared that it had a bunch of wrong answers. She showed me what she was talking about and I quickly diagnosed two things:

I set up my iPad to record the conversation and away we went.

Tabitha (5 years old): If Griffy used this, he must have gotten his homework a little bit wrong.

Don’t you think so?

I set the stage for our conversation by recapping its beginning. I chose my language carefully. I didn’t want to lie to the kid, so I spoke of “6 and 1” not “6 plus 1”.

Me: And what should it give us?

Wait. Has she picked up on what’s going on so quickly?

T: There’s seven and then one would be eight.

Me: Right. But what about when you do 8 and 1? What should that be?

Me: And uh…What do you think it’s…

What do you think this is gonna tell us, based on what we saw from the other ones?

Me: What do you think it is gonna say?

Now we’re on the same page. She thinks it’s supposed to give sums, so she expects 9, but with some support she is able to apply the pattern that the machine is giving us one less than the right answer.

Me: Why is that? Why do you think that?

Me: What should it say?

T: Awww! This thing is a liar!

Now it’s time to change things up. We have worked our way down the left-hand column. So she has done 7+1, 8+1, 9+1. She has one more than nine nailed down. Can she as easily do nine more than one? Does she know that addition is commutative?

Oh wait. Oh yeah, it should be…

She is banging these out as quickly as she did the others. She seems to be using the commutative property of addition. Dig it.

This thing’s a liar!

Me: All right…what about…

T: This thing is a total liar.

I have no idea what she means by this. She clicks before I can ask.

T: Some of these are right.

Her brother, Griffin (8 years old) wanders into the room. The jig is up, I fear, so I chase him off.

Griffy check out this one.

This thing is a total liar.

Me: All right, except this one it got right.

T: Yeah, but what about the other ones?

It’s six. But it’s supposed to be five.

I don’t think she noticed that this wrong answer is one more than the one she expected, while the previous ones had been one less.

T: What? That’s totally not right!

She clicks. It’s not thirteen; not even close. But she’s not really sure about 6+9 anyway.

T: What was it supposed to be?

I have to think quickly. How can I ramp this up?

It occurs to me that she may think these are arbitrary wrong answers; that this machine is some sort of random bad answer generator. I want to pique her curiosity by demonstrating that there is something else going on.

So I propose working backwards.

Me: Ooo. OK. Let’s play…are you ready for this?

You choose one. Choose a hard one from down in here.

She chooses a problem. Out of the corner of my eye, I can see that she is focused somewhere near the bottom of the machine.

By this time, Griffin has wandered back into the room.

Griffin: Nine plus four is 13.

T: Because you’ve seen it before.

Me: You think I have this whole thing memorized?

Do a really hard one.

What did you get?

But here I’ll tell you…

The iPad ran out of memory at this point.

And then the moment passed and we were on to other things.

A few weeks back, bedtime was spiraling out of control. The kids share a room; they would be wound up at bedtime and the transition to sleep was not happening smoothly. We had a big, big problem on our hands.

We solved the problem with 10-minute reading time. The kids have to be in their beds. We dim the lights. We set a timer for 10 minutes. It has to be quiet during that time. Then we turn out the lights, do the picture (remember the elephants?) and sleep comes more easily.

Complete transformation. It is awesome.

Tabitha, the other night, wanted to color. We talked and agreed that she could do it sometimes. As is the nature of 5-year olds, she soon wanted to know the limits.

The following conversation took place on Wednesday night this week.

Tabitha (five years old): I know I can’t color every night but can I tonight?

T: Then read, then color the next night?

Me: I don’t know. I think reading twice before the next color is better.

To be clear. It was not my intention to get into a math conversation at this point. I just wanted her to go to bed.

No, this move on my part was truly about literacy, not math. I don’t want 10-minute reading time to turn into 10-minute coloring time. I really, really like the idea that books will become part of my kids’ independent bedtime routines.

But Tabitha loves to know the rules she’s playing by. And when those rules are based on numbers, they’re going to lead to math every time.

First of all, I used the term ratio with absolutely no expectation that she would process it, and I am quite sure that she did not. I have long been an advocate of using good vocabulary with my children—there is no shame in not knowing the meaning of a word, but also no sheltering them from the fact that these words exist. This is at least partly the source of their substantial vocabularies. But I do not believe she knows the word ratio.

Secondly, Tabitha’s reformulation of the 2:1 ratio as 4:2 blew me away. It nearly slipped past me without notice. I was focused on getting them to bed; we were in the truly final phase of that process. I had pretty much tuned her out.

So I replayed her question in my mind, counting the reads.

Me: Yes. That would be fine. You may do that.