Most teachers assign final grades by using the mathematical mean (the “average”) to determine them. Give at least 2 reasons why the mean may not be the best measure of achievement by explaining what the mean hides.

All measures of center hide variation.

Using the mean makes zeroes a problem in grading. Wildly divergent values (such as a zero in a gradebook) will greatly affect the mean. It is hard to argue that 2 A’s and a zero is the same as consistent D work. Yet this is how the mean plays out.

But going too far down this road will only lead to critiques of the whole system of grading students at all. I find that system to be indefensible and counterproductive. I have made my peace with it, and I try to do as little harm as possible with the responsibility I have to assign grades in my work.

Michael Pershan boldly posted How I Teach Probability recently. I have struggled mightily with the teaching of probability over the years, so I took his video as an invitation to share and discuss.

The following is a copy/paste of an email I sent him (with, perhaps, some light editing).

I have been working on a longer, better edited version of the basic idea that I lay out here. But I’m working on tons of other stuff, too, so I cannot promise that the other one will ever see the light of day.

So here you are. Enjoy.

An important bit of honesty first: I am crap at teaching probability. Many reasons, mostly having to do with the ephemerality and abstraction of the topic, in contrast to the cold, hard demonstrable reality of (say) fractions.

With that said, I seem to have been making progress with an approach that has one important extended feature to the sort of work you show in your video.

To that I add (2.5) explicit discussion of students’ probability models that inform their guesses, and then (5) some related follow-up activities.

After collecting guesses, I ask someone in class to describe WHY they said what they said. My job, then, is to press for details and to capture what they are thinking as carefully and accurately as possible on the board.

Once I have that, I ask for someone to describe a different way of thinking about it. Even if slightly different, we get it on the board. My writing isn’t abaout me dispensing  wisdom, it is about making a permanent record of a student’s model in enough detail that we will be able to test it later. For anything even moderately complicated (such as rolling two dice and considering their sum), I am disappointed if we don’t get at least four different models.

Now the data collection doesn’t just tell us who guessed closest; it can rule out at least some of our models.

As an example, in your scenario I would expect something like this:

As many different ways of thinking about it as my students have, I will dutifully record. I encourage argument, as each new argument suggests a new model, which we can test.

Now before we roll those dice, we set up a way to test these models. In my experience, I have to devise that test. My students are not sophisticated enough to think this way yet.

In your example, and with these models, I might identify an important difference to be that Model 1 predicts equal numbers of 0 multiples of 3 and 1 multiple of 3, while Models 2 and 3 predict three times as many 1s as 0s. Hopefully we also have a model that predicts something in between.

So now as we roll, we are not just looking for which happens more often, but to relative frequency. Because the model that better predicts the relative frequency that actually happens has got to be the better model.

Much more to say, examples to offer, etc.

Go out and collect a modest-sized, discrete dataset. Name lengths of all of the students in your classroom, say, or the number of people in each of their households.

This bar graph is only tangentially relevant, being more of a case-value plot of four different populations. But it breaks up a texty post. So deal with it.

Now play with that data.

If we add one or more new (hypothetical) cases, can we…

If we delete one or more actual cases, can we…

Thanks to Susan Friel, Connected Mathematics and tons of other creative folks for getting me started with this. Future elementary teachers to tackle this shortly. I’ll report back.

I could get myself in trouble here.

Regular readers are aware that part of my professional time is spent working on a large-scale middle school curriculum project. The bulk of those on the project are university faculty members in fact and teachers in spirit. We do not work under a paradigm that puts a lot of value in the term proprietary.

We are respectful of intellectual property rights but we don’t spend a ton of time thinking about them. Fair use is an important phrase in this community and the idea that our own ideas might be used by others is a delightful one.

This will not be surprising to those who read stuff on the web. The blogosphere operates in a very similar vein; one which has even been formalized in Creative Commons licensing.

But that’s the development side of the curriculum. We create the intellectual property. A traditional publisher produces the text materials.

Publishers operate with a different world view. Content is money. Use of others’ intellectual property exposes one to lawsuits, except with meticulously obtained permissions, but those permissions are obtained through a legal department that is itself expensive. And obtaining permission may involve a fee.

As an illustration of this clash of world views in 21st century teaching, I offer an abridged list of permissionable selections from the previous version of the curriculum that the publisher would prefer to have removed from the next version. The list is much, much longer than the one reproduced below.

I can’t quite decide whether this is a Truly Unfortunate Representation of Data. Help me out here.

The following is from an Educational Researcher article on the alignment between the math and English/language arts standards of various states and those of the Common Core State Standards (about which, more here). 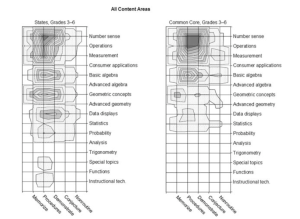 The graphic (and several others like it) comes with the following disclaimer:

When reading these graphs, the representation of content emphasis is accurate at each column- by-row intersection, but the smoothing between rows and between columns is not meaningful because the data are nominal. (p. 107)

What this means is this, Because the data is categorical, we could really have put them in any order we like. As a consequence, any patterns (any patterns!) we see within each graph are simply artifacts of the order we chose. This smacks of TURD to me. But I stand ready to be convinced. Any takers?

So here’s an interesting data representation. The New York Times invites readers to place a point on the graph below indicating their own emotional response to the news of the death of Osama Bin Laden (on the x-axis; right is positive, left is negative) and their feeling about the significance of the event (on the y-axis, up is more significant, down is less). In addition to plotting a point, readers are invited to leave a comment.

As you move your cursor around the graph, the comment associated with each point appears.

The critical thinking task is to predict the comments associated with the extremes-what did someone say who put his/her point in the upper right? What about the upper left? Each of the other corners? The origin? What about the people whose points are at the ends of each axis?

Caution! The task is harder than it seems.

And after you’ve messed around a bit, consider the profound difference between this rich and intriguing data representation and one I posted recently.

The opposite of TURD (Truly Unfortunate Representations of Data)

The New York Times, for at least the last 10 years, has been doing amazing graphic design work for data representation. The Walker Art Center here in the Twin Cities recently hosted a talk by Kevin Quealy of the graphics department at the Times. I was unable to attend, but it’s online.

I am dying for the end of the semester and having time to watch it.