From the usual source:

Can you post a calculus problem and solution so we can see what it looks like?  Also, how and where would you use it in the world?

There are three major ideas of Calculus. I’ll tell you about the first two, since they’re the ones that are easy to wrap your mind around. Then I’ll finish with the third. The first two are:

In algebra, slope has to do with straight lines. If Emile walks 75 meters in 30 seconds, you have no trouble figuring out how many meters per second he walks. That’s his walking rate; it’s the slope of his line. In calculus, we would say that this is the derivative of his walking function.

But what if his rate isn’t constant? What if he starts off slowly and speeds up as time goes by? What if his walking function is more complicated than y=2.5x? You get a taste of how to figure rates (slopes) of non-linear relationships when you work on first and second differences in studying quadratic or exponential relationships.

But first and second differences give us average rates of change. Calculus is interested in instantaneous rate of change-not just what is the average speed between 2 and 3 seconds? but how fast is this thing moving right now?

Consider the video below:

How does the speedometer work? Calculus answers that question using derivatives.

If we model the car’s distance traveled as a function of time:

Going back to Emile who walks 2.5 meters per second. If you know his walking rate and how long he walks, you can figure out how far he walked. And you do that frequently in algebra.

But what if his walking rate is changing? Now it’s a much harder problem, and it requires more advanced mathematical techniques. Go back to the video:

How far did the car travel in going from 0 to 60? Now, strictly speaking you don’t need Calculus to answer this. You could mark the beginning and end of the run and measure it. But what if it’s an airplane and you need to know how long to make the runway? What if it’s the Space Shuttle? These would be harder to measure directly. The Calculus idea of integral solves these kinds of problems.

If we model the car’s speed as a function of time from time 0 to time a (meaning whenever the car gets to 60 mph):

Then we would write:

And we read this as The integral from 0 to a of g of t. After specifying g as a function and a as a number, this integral has a numerical value-the distance the car traveled.

Now think about what you know in algebra. To find Emile’s speed, you divided his distance by his time. No matter what two points you choose on Emile’s graph, the difference in distance divided by the difference in time will be the same. But when his walking rate is changing, that’s not true. The average speed will depend on which points you choose. And as a general rule, the average speed between two times will not be the exact speed he is traveling at either time.

So mathematicians get a better approximation of the speed at a given time by taking averages over small intervals of time. And they imagine an answer to the question, What if we averaged his speed over 0 seconds? This would mean dividing by zero, which is impossible. The third major idea of Calculus-limit-gets around this technicality.

And so are integrals for a similar reason. Our attempts to precisely answer questions about how far the car travels in getting to 60 mph inevitably lead to adding up infinitely many numbers. We literally do not have time for that. Limits get us around this problem, too.

Can you have a negative length?

Preliminary confidential to the KMS middle schoolers who asked this question: I am continually impressed by your active minds; it was a delight to meet you and be your teacher for a day recently. And you should be very grateful for the teacher you get to have every day. Ms. O cares deeply about you, about keeping your minds active and about your success. Thank her for that now and again in 10 years when you realize the impact she has had on your lives.

Back to the question: Technically, no. “Length” is always positive. As is “Area”. As is “Speed”.

But if you are willing to expand your mind and imagine a world with negative lengths, you don’t cause any problems. But you will have to be ready to consider negative areas. And negative speeds.

In Physics, they deal with this by the difference between speed and velocity. Velocity can be negative, as it includes direction. Forward velocity is positive; backward velocity is negative. Speed is the absolute value of velocity. Whether my velocity is 10 mph or -10 mph; whether I am running forward or backward, my speed is 10 mph (positive).

And this requires a negative version of distance. In Physics, this is displacement. Displacements can be positive or negative. Distance is the absolute value of displacement.

In Calculus, it can be useful to imagine a world in which area (and length) can be negative. It’s not usually encouraged, but it causes no problems and in fact can make some concepts more intuitive.

How can negative areas and lengths be intuitive? Well, you’re an eighth grader and you thought of them-shouldn’t a college student be able to also?

Is it still a triangular prism when it sits on a rectangular side?

A prism is a 3d figure and each is named after its base. Below is a triangular prism.

If you rotate it so that the rectangular face is on the bottom, as below, why is it still called a triangular prism if technically its base is no longer a triangle?

In the everyday world, we often get these confused. Think of a baseball diamond. We call it a “diamond” because it sits on its corner. 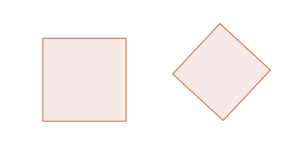 These are both squares.

But in geometry that doesn’t matter. A baseball “diamond” is really a square; it has four sides all the same length and it has right angles. That’s what it takes to be a square in geometry-it doesn’t matter what direction the sides are running, nor where the square is.

By the way, the rectangle-as-base orientation of a triangular prism suggests another formula for volume. If we put two of these prisms together (as below), we get a solid whose volume is (Area of rectangular base) x (height of prism).

So the volume of a triangular prism is half of that: (1/2) x (Area of rectangular base) x (height of prism).

Why do we talk about “proper factors” but not “proper multiples”?

I had never thought about this before. A colleague and I are thinking about this. My colleague’s guess is that in number theory (the mathematical field that deals with this stuff), there are some things that are true of proper factors that are not true of the number itself, and that this is not a problem with multiples.

But I don’t really know for sure. I’ll find out.

How do they know irrational numbers never repeat?

What a lovely question. When you are told that “irrational numbers have decimal representations that never repeat,” it’s a good instinct to say, “That’s just because you haven’t looked hard enough.”

And the way we know they don’t repeat isn’t what you expect. You expect that mathematicians have looked, but not found patterns in the digits of irrational numbers, and that from this they conclude that the digits don’t repeat. You are correct in being suspicious of this argument.

But it’s not the one mathematicians use.

Instead, we know that all repeating (or terminating) decimals are rational. And we know that rational numbers have other properties (like that they can be simplified-or reduced-to a fraction with whole number numerator and denominator). And then we know that a number such as pi or the square root of 2 cannot be reduced to a fraction with whole number numerator and denominator. Therefore pi and the square root of 2 must have decimals that don’t repeat (or terminate…because if they did, they would be rational, which would mean they could be reduced which they cannot).

This is common in mathematics-knowing that something is true in a roundabout way.

Overthinking my teaching
Blog at WordPress.com.