An interesting story about research and assumptions

Nature v. nurture. Age-old debate on relative importance. Not gonna settle it here. Not even in the limited context of factors influencing mathematics success.

There is lots of interesting research going on, of course. I want to tell you a quick story about a very small subset of that research.

A few years back, a group of educational psychology researchers published a study that phys.org headlined, “Math ability is inborn“.

The study investigated the ability of 4-year olds to choose the larger of two sets of dots when these sets were viewed briefly (too briefly to allow for counting).

They found that children who were better at this task also knew more about numeration and counting.

A quote from one of the researchers, Melissa Libertus:

Let’s pause for a moment to think, shall we?

If a child has not had formal instruction in mathematics, is the only remaining possibility that her mathematical performance is due to innate skill?

Of course it isn’t.

There is also the possibility that the child has absorbed some mathematical knowledge from her environment, and that different environments might provide differential input.

Maybe the child who is better at discerning the larger set has more practice doing just that. Maybe that child’s parents have been asking her how many? how much? and which is more? for the last two or three years.

Maybe that child’s parents have been Talking Math with Their Kids.

From mrdardy in the comments recently:

Slightly off topic, but I wanted to share a conversation with my soon to be four year old daughter from this past weekend, We were on a long car drive and she was asking how far we were from our hotel. I replied that we were twenty minutes away. Later in the pool she was jumping to me from the pool steps and commanding me to back up some. I asked her how far I should go and she told me to be five minutes away. I said “Do you mean five feet away?” and she replied, firmly, that she meant for me to be five minutes away. I am wrestling with whether I think this is just charming and (semi) clever on her part or whether I need to start answering her pleas in the car with distances. Curious to hear some ideas on this.

I am happy to weigh in here.

Anna Sfard describes knowledge as participation in a discourse and learning as changes in that participation. That is, we can measure whether someone knows something only to the extent that they can talk in ways that adhere to the norms of other knowledgeable people. And when these behaviors change to conform more closely to these norms, we can say that they are learning.

Nowhere is this more clearly demonstrated than in the learning of young children.

The four-year old in question here (let’s call her “Little Dardy”) is trying very hard to participate in conversations about measurement. Measurement, though, is a challenging and rich domain.

mrdardy outlines two scenarios in which the concept of how far comes up for Little Dardy. It shouldn’t be at all surprising—considering Sfard’s model—that she answers a distance question in the same way her father had earlier on. She has taken his example in using units of time to discuss how far something is.

My approach would not be to avoid using units of time to answer the question how far? After all, people do this frequently; it is part of the discourse of measurement.

No, I would use this tension to encourage Little Dardy to think about the two attributes in question here: time and distance. It might go something like this…

LD: More! You need to be five minutes away!

D: Do you mean five feet away?

D: OK. Tell me when I’m there. But then don’t jump right away; I want to ask you a question before you do. [Daddy backs up slowly…]

D: Right. Here’s my question: Do you think it will take you five minutes to get to me from where you are?

D: Do you know how long five minutes is?

D: No, no. Can you think of something we do together that takes five minutes?

D: It takes us about five minutes to read [INSERT TITLE OF FAVORITE PICTURE BOOK HERE] together. Do you think it will take that much time for you to get to me?

At this point, I have no idea how Little Dardy will respond (which is what fascinates me so much about talking math with kids). I do know that pretty soon, she is going to want to jump, and that whether that’s right away or after a few more exchanges doesn’t really matter.

What matters is that she’s been asked to think.

This line of discussion lays the foundation for thinking about distances, times and their relationships to each other. It supports Little Dardy’s attempts to participate in the discourse of measurement.

My recent conversation with Tabitha about the height of our hill was in a similar spirit; we worked on the meaning of height when she asked me to lie down on the hill.

Posted in Talking math with your kids, Uncategorized

Theoretical models and all that

Let’s say you had a four-year old daughter and she was learning to count.

Let’s further say that you had a deep interest in number language, had read widely on the matter and thought very, very hard about it. Maybe you had even published an academic paper on relationships among number language, quantity and numeration (pdf).

Let’s say that you (among many other people before you) had noticed that while the English teens have a pattern, it’s a fairly obscure one.

Let’s also say that you notice that (unlike some other languages such as Japanese) there is also a relatively obscure pattern for the names of the decades: twenty, thirty, forty, fifty, etc.

Finally, let’s imagine that you noticed that we start counting at one, but we don’t start the twenties at twenty-one nor the thirties at thirty-one.

Don’t you think you’d put all of this together to build a theoretical model of learning to count that includes (1) trouble in the teens, (2) skipping twenty in favor of twenty-one, (3) more success in the twenties than in the teens, and (4) ending the count at or about twenty-nine?

And then, when you saw that theoretical model play out in great detail, don’t you think you’d want to capture it on video?

I know I would.

Tabitha was telling me about the Muppets, which she and her brother saw without me recently.

I’ll spare you her lengthy plot summary. But if you haven’t seen the movie, the plot surrounds a boy born into a human family, but who is, in fact, a Muppet. Fish out of water. Happy ending.

So I ask Tabitha (who, recall is 4 years old and will soon be 5) a question.

Me: Is it possible that you’re a Muppet?

Tabitha: Dad! No! I don’t look like a cartoon.

This is great, right? All Muppets look like cartoons. I don’t look like a cartoon. Therefore I am not a Muppet.

Ever the teacher, I want to assess.

Me: Nice. Are all cartoons Muppets?

Tabitha: Sheep in WordWorld isn’t a Muppet. Clifford’s not. 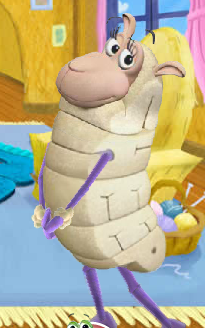 Sheep from WordWorld (on PBS)

Me: One more question. If you’re not a Muppet, does that mean you don’t look like a cartoon?

I’m asking about whether:

She thinks for a while. Finally.

Tabitha: Dad! Clifford’s not a Muppet, but he looks like a cartoon!

So not only is it:

She also seems frustrated by the obviousness of my question, given that:

I was having a little quality time with my favorite 4-year old the other day over quesadillas in the kitchen.

Tabitha: What is an umbrella bird?

Me: I don’t know. I’ve never heard of one before. Did you hear about umbrella birds somewhere?

Four-year olds don’t concern themselves with the law of the excluded middle.

We got this book from the library recently. My daughter Tabitha (4) loves it. For her, the fun is in identifying which fox is which.

But for me, it’s all about the counting. Basic plotline (don’t worry; no spoilers):

The mother goes out to rustle up a chicken for dinner. The wee ones are told to stay behind. They sneak out. Then they worry that someone might get lost. So they decide to count to make sure no one is missing.

This is where it gets good for someone who teaches math for future elementary teachers. One of the foxes (we’ll call her Misty-sorry, I’ve returned the book to the library) volunteers to count. She counts each of the other foxes and only reaches four. This confirms the wee ones’ worst fears. There are supposed to be five, so someone’s missing.

If you have studied CGI, you see the clever dilemma here. I’ll spell it out in gory detail:

(1) Misty has only counted part of the whole. So the fact that she reaches only four is resolved as a Part-Part-Whole/Part-Unknown problem.

(2) Misty misinterprets her result as the answer to a Separate/Change-Unknown problem.

That is, she correctly resolves the computation. Where she errs is in interpreting the conceptual meaning behind this computation.

Of course the first time we read the book, I stopped and asked Tabitha if she knew what the problem was. She didn’t catch my drift. So I reiterated the fox’s counting process and pointed out that (1) she only got to 4, and (2) she takes this to mean that someone is missing. I asked again, What do you think is wrong here?  Where do you think the fifth fox is?

I know I am warping my children. But rest assured that our lives aren’t like this 24/7. These are just the interesting bits for my math teaching friends.

Posted in Problems (math), Talking math with your kids

A circular conversation with a 4-year old

It’s Sunday morning. Summer has arrived. We are enjoying a beautiful morning on the front porch. I am finishing my coffee. Tabitha (4) has finished her donut.

Why don’t circles have tips?

What do you mean?

Why don’t circles have tips?

What do you mean by tips? What shapes do have tips?

Triangles and stars. Why don’t circles have tips?

Well…that’s a good question. I guess that’s part of what makes them circles. If they had tips, they wouldn’t be circles.

But what if a circle did have a tip?

Do you want the real answer?

It’s circular. Its edge is a circle, right?

What if there were spines?

What do you mean?

What if there were spines all around the circle?

Well then the tips of the spines would be further from the center than the base of the spines, so it wouldn’t be a circle.

What if they were all around the circle?

What about carousels? They are circles and they have points.

I don’t understand what you mean.

What about carousels? They are circles. They have horses on them; those are like tips.

Oh. Right. The circle is just the edge of the carousel. The horses aren’t part of the circle.

What got you thinking about circles, anyway?

[points out the window]

What are you pointing at?

What about the tree?

I don’t get it. What about the bark made you think about circles?

Do you mean if you cut the trunk, the bark around the edge would look like a circle?

And that circle would have tips?

Tabitha starts 1/2-day Pre-K in the fall. She’s going to be a handful.