Griffin (8): How long is a tortoise year?

Me: It’s about three.

G: A tortoise year is three years then.

Me: No. It’s the other way around.

. I’m not sure how many months that is.

Me: Is a dog year

of a year, or is it seven years?

G: Well a dog would age one year in

Now I don’t know what a dog year is!

The boy makes a good argument.

I was feeling guilty the other day about spending $7.00 on a gallon of cider. We are at the end of cider season here in Minnesota. It’s a seasonal treat that doesn’t come cheaply.

But we are on a budget (community college salaries only go so far!) and I was feeling bad about the expense-guilty for giving in to the sweet, sweet temptation of delicious fresh cider.

And then my daughter asked for a juice box.

And suddenly I didn’t feel so guilty anymore.

Unit rates can have that effect sometimes.

So I work for this curriculum project.

Back in the old days (late 1990’s) we had a problem that had interesting data, but impossible to teach. Basically seventh-grade students were supposed to write sentences comparing the popularity of various activities among various demographics based on this table of data from the Statistical Abstract (which document, by the way, you need to spend some time with-there’s some great stuff in there for math teachers of all stripes):

Nice task. But where it sat in the curriculum, it was too much. Too much data, too much variation in size of groups, too much everything. It crashed and burned for me and many others every year.

So then we revised and scaled things back. The present version of a problem that uses real data to get seventh-grade students making comparison statements involves this table of data:

Much cleaner and more manageable.

What would make it better?

It’s unclear why I would compare the Giant Sequoia to the White Oak, except to notice that even a big oak tree pales in comparison to a Giant Sequoia.

But what if I’m dealing with bonsai trees? In Karate Kid, Daniel-san calls them baby trees. Are bonsais really miniature versions of real trees? If so, how can we describe the similarities? And if not, how can we ferret that out?

We’re comparing heights and widths (essentially) of trees. I want to see that, not just have it be numbers in a table.

Here was my first attempt at this: 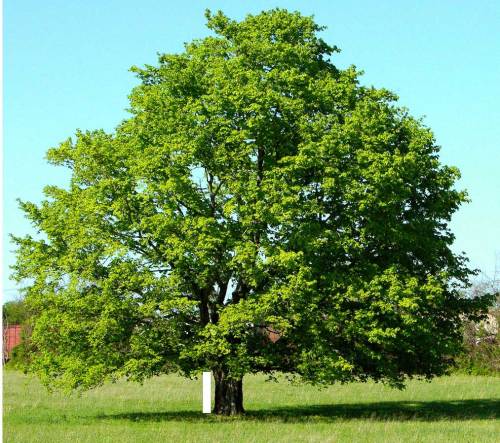 In both cases, that’s a 1 foot by 5 foot rectangle.

In both cases, that’s a maple tree (different kinds, but still…)

And we ask students to compare heights, spread and trunk-circumference of the bonsai and full-sized trees. Then there’s another pair-this one two Ponderosa Pines. Long story short: height/spread ratio consistent within species, but the trunk is out of whack.

Personally, I am more interested in comparing the bonsai to the real than I was in comparing two different types of trees in a table. It’s a better task, I think. But the visual isn’t quite right.

So here’s a second try:

This one is more provocative. Not as good for making estimates of measurements, but better for seeing the comparisons in question.

And then we follow up with that table of trees and ask kids to give reasonable measurements of bonsai trees for the other tree types.

Now…these images are scammed from various places on the Internet. These particular pictures are only in use for classroom trials. The real deal will require new photos. So I turn to the web for a bit of guidance…

Since the new pictures will be from scratch in the spring/summer, what modifications would make the images more compelling?

What’s up with those triangles?

From the same Common Core document:

I have no beef with the mathematics here. Close readers will recognize echoes of recent proportion discussions on this blog.

But really, what’s up with those triangles?

A propos of recent discussions

Here’s another gem from the good folks at Common Core:

This is but one gem in 15 pages of Talmudic exegesis on ratios and proportional reasoning at sixth and seventh grade.