The hierarchy of hexagons

True confessions: I find a great deal of the school geometry canon tedious.

Does a trapezoid have exactly one or at least one set of opposite parallel sides? Circumcenters and orthocenters. Dull, dull, dull. Boring, boring, boring.

School geometry seems to me one of the most lifeless topics in all of mathematics.

And the worst of all? The hierarchy of quadrilaterals.

This representation of relationships among the special quadrilaterals bored me in fourth grade and I cannot muster energy for it as an adult. But I gotta teach it with my future elementary teachers.

So a year ago, I had an insight; an idea about breathing some life into this dead horse. What if we classified hexagons instead?

We began with these: 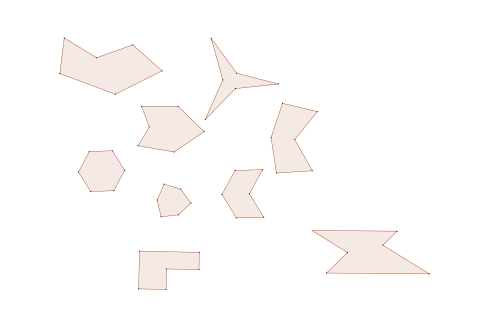 We cut these out. I had students choose one that seemed special to them for some reason, and to identify what property or properties make the hexagon special.

Students identified this one as being special because it has all right angles:

We clarified, defined interior angle and right angle, and agreed that this hexagon is special because it has exactly five right angles. The shape needed a name and we chose Bob. So a Bob is a hexagon with five interior right angles.

We also agreed that we would only specify interior in the future if there was likely to be confusion; we gave ourselves permission to refer to the interior angles of a polygon simply as angles in most cases.

Students identified the next figure as being special because it has three congruent acute angles.

Again, we needed a name and it became a Stacy. So a Stacy is a hexagon with three congruent acute angles.

We identified several of our hexagons as being concave, so we defined a concave hexagon as one that has at least one interior angle greater than 180°. (Side note: It turns out that this is the standard definition; I had remembered something about diagonals staying in the interior. In any case, we had to do some work to get from the visual shape with a dent definition to this one.)

I threw a couple of useful terms into the mix: equilateral and equiangular, and pretty soon we had enough to work with.

Having polished off all of the pairwise possibilities, we took to the whiteboard to categorize and to argue.

My students proved that no Bob is equilateral.

My students proved that a Bob cannot be equilateral.

Their argument was based on parallel sides in a Bob-how there are two sets of three sides, and that the lengths of two sides in a set add to the length of the third. If a Bob were equilateral, one of these sides would be of length zero, which means it’s not a hexagon and so not a Bob. QED. I have spared the reader some details.

Behold the hierarchy of hexagons: 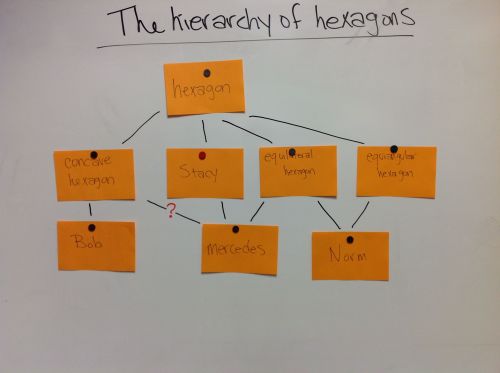 After this, the hierarchy of quadrilaterals was a mostly trivial exercise. We built it in like 20 minutes and used it as practice for the skills we developed with the hexagons.

We marveled at the bizarre relationship between the definitions of quadrilaterals and their relationships. Why is a rhombus defined in  terms of its side lengths, while a parallelogram is not? This makes it hard to see why a rhombus is a special parallelogram.

The question of the concavity of Mercedes was an open one for a couple of weeks. Then yesterday we got out the polystrips. Boom!

Not all Stacys are concave.

If we had more time, we would revise our hierarchy to incorporate this fact. But we have to move on to measurement.

Our work here is done.

This entry was posted in Curriculum and tagged geometry, hexagon, hexagons, math for elementary teachers, quadrilaterals. Bookmark the permalink.

23 responses to “The hierarchy of hexagons”