Kellogg’s has issued Froot Loops fruit snacks in the shape of digits. (Side note: Cheez-Its need to get on board with this! There have been Scrabble tile Cheez-Its for years. We want numbers, operations and relational symbols!)

Naturally I bought some. 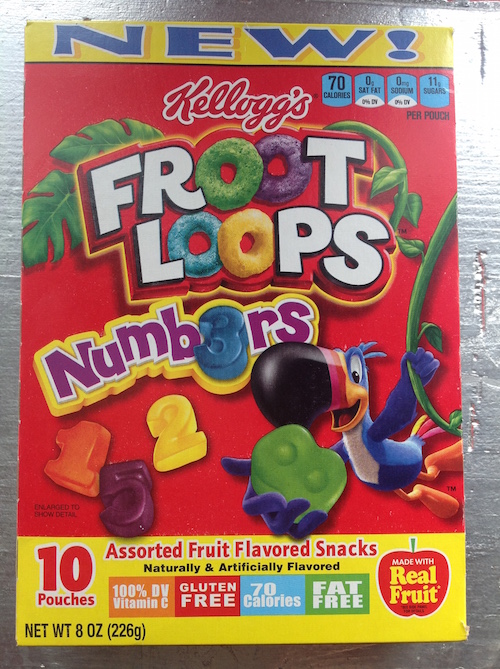 Tabitha (8 years old) asked—as she does in these scenarios which occur with great frequency—Are you just buying that because it’s mathy?

But how to put them to use?

After many rejected ideas, here’s my favorite.

Here are the contents of one pack.

I’m setting the over/under on the sum of the next pack at 41. Do you want the over or the under? Why?

Play along with your questions and answers in the comments.

I’ll open the pack on Wednesday, May 27.

Michael Pershan boldly posted How I Teach Probability recently. I have struggled mightily with the teaching of probability over the years, so I took his video as an invitation to share and discuss.

The following is a copy/paste of an email I sent him (with, perhaps, some light editing).

I have been working on a longer, better edited version of the basic idea that I lay out here. But I’m working on tons of other stuff, too, so I cannot promise that the other one will ever see the light of day.

So here you are. Enjoy.

An important bit of honesty first: I am crap at teaching probability. Many reasons, mostly having to do with the ephemerality and abstraction of the topic, in contrast to the cold, hard demonstrable reality of (say) fractions.

With that said, I seem to have been making progress with an approach that has one important extended feature to the sort of work you show in your video.

To that I add (2.5) explicit discussion of students’ probability models that inform their guesses, and then (5) some related follow-up activities.

After collecting guesses, I ask someone in class to describe WHY they said what they said. My job, then, is to press for details and to capture what they are thinking as carefully and accurately as possible on the board.

Once I have that, I ask for someone to describe a different way of thinking about it. Even if slightly different, we get it on the board. My writing isn’t abaout me dispensing  wisdom, it is about making a permanent record of a student’s model in enough detail that we will be able to test it later. For anything even moderately complicated (such as rolling two dice and considering their sum), I am disappointed if we don’t get at least four different models.

Now the data collection doesn’t just tell us who guessed closest; it can rule out at least some of our models.

As an example, in your scenario I would expect something like this:

As many different ways of thinking about it as my students have, I will dutifully record. I encourage argument, as each new argument suggests a new model, which we can test.

Now before we roll those dice, we set up a way to test these models. In my experience, I have to devise that test. My students are not sophisticated enough to think this way yet.

In your example, and with these models, I might identify an important difference to be that Model 1 predicts equal numbers of 0 multiples of 3 and 1 multiple of 3, while Models 2 and 3 predict three times as many 1s as 0s. Hopefully we also have a model that predicts something in between.

So now as we roll, we are not just looking for which happens more often, but to relative frequency. Because the model that better predicts the relative frequency that actually happens has got to be the better model.

Much more to say, examples to offer, etc.

I had a lovely argument with Chris Lusto about luck yesterday. If you’re going to take the time to dig into this, read his post first.

As I see it, we have outlined two stands on the meaning of luck.

I argue that (1) is a probabilistically sophisticated view, but that (2) is much closer to the commonly held meaning. Furthermore, I argue that probability and statistics instruction that doesn’t directly address (2) is unlikely to make useful shifts in people’s thinking about probability and chance.

I got to thinking about all of this in reading Thinking Fast and Slow by Daniel Kahneman this summer. Kahneman doesn’t define luck. But he uses the term.

A few years ago, John Brockman, who edits the online magazine Edge, asked a number of scientists to report their “favorite equation”. These were my offerings:

He goes on to describe a common scenario in which a golfer scores very well on day 1 of a tournament and more poorly on day 2.

I don’t question whether Kahneman himself understands luck in the sense of either (1) or (2) above. I do think, however, that he is writing in a way that supports (2), and I think that’s unfortunate (heh).

Failing to see eye-to-eye with both Lusto and Kahneman (two formidable minds, to be sure), I went to my next favorite source of wisdom.

Me: What is luck? What does it mean to be lucky?

Griffin (8 years old): Well, if you found five dollars on the street, you would be lucky. Or if I opened my drawer and there was a bunch of gold in there, that would be lucky.

Me: Why would that be lucky?

G: Cause five dollars is a lot of money. And because gold is very valuable.

Me: What if you found a penny? Would that be lucky?

G: If it was heads-up it would be. Some people think that finding a penny heads-up is lucky.

Me: Right. But what would that mean for it to be lucky?

G: Well, if it was New Year’s Eve, you could make three wishes and they would come true.

Me: OK. And what if it weren’t New Year’s Eve. What if it’s just a regular day and you’re walking up to Romolo’s [our neighborhood pizza joint] and you found a penny on the ground, heads-up. What would it mean for that to be a lucky thing to have happen?

G: Well maybe only one wish would come true.

Me: So if something is lucky, it makes good things happen, like wishes coming true. Is that right?

What CAN you do with this?

My son (Griffin, nearly 7) saw Hex Bugs in a store months ago and was instantly smitten. His dream came true recently when my wife bought him one.

The Hex Bug now does shows in his home/stadium. See video.

There is something quite lovely about this guy’s random walk. But I can’t quite figure out what scenario I can put him to generate a real probability problem. So I ask, What can you do with this?

How I track attendance

As with all useful management strategies, I have no idea where I got this idea. If there’s something useful in it, please adapt and share widely.

At the college level, class attendance is very very different from the K-12 schools. Most college instructors don’t take attendance regularly. Of those who do, a large proportion pass around a sign in sheet.

Coming out of a K-12 tradition, I know that taking roll call is an important part of learning my students’ names (this, incidentally, is not universally valued in higher ed). But I don’t have time to take roll every class period.

I used to factor attendance in by counting the number of missed classes, and running that number through a rubric. But as I mentioned I don’t have time to take attendance every class period, and sometimes I forget. And then I am imperfect at reconstructing attendance after class is over (strong personalities tend to get noticed as absent more often than wallflowers do, for example).

You see the problem. 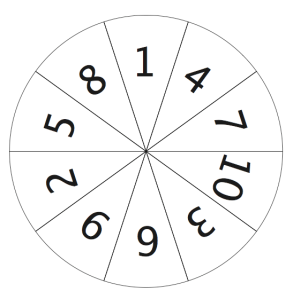 You don’t know in advance on which days I will spin, but I do; they’re determined by a Fathom document at the beginning of the semester and posted where I can refer to it in my office.

If the 22 spins don’t total at least 101 points, we will adjust the cutoffs for the categories proportionately. This has never happened.

If you are absent or come after the spin, you get zero attendance points for the day.

I will not tell you whether we will spin next class, nor whether we spun last class (ask your classmates-odds are you have at least 40 of them).

If I was supposed to spin and I forget, I’ll do it next class. You’ll never know about it, though.