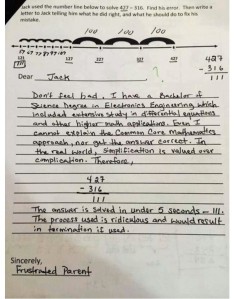 Ugh what a mess.

I’ll say what I have to say (comments closed) and move on. If you wish to discuss further, hit me up on Twitter or pingback to the blog. Want to talk in private? Click the About/Contact link up top.

Also, Justin Aion—middle school teacher extraordinaire—wrote up his views on the matter. You can read them over in his house.

The purpose of this task

I cannot say whether this was the right task for this child at this time because I do not know the child, the teacher or the classroom.

I can say the following:

The Common Core State Standards do require students to use number lines more than is common practice in many present elementary curricula. When well executed, these number lines provide support for kids to express their mental math strategies.

No one is advocating that children need to draw a number line to compute multi-digit subtraction problems that they can quickly execute in other ways.

But the “Frustrated Parent” who signed that letter, and the many people with whom that letter resonated, seem not to understand that they themselves think the way Jack is trying to in this task.

Here is the test of that.

You had better not be getting out paper and pencil for this. As an adult “with extensive study in differential equations,” you had better be able to do it as quickly as my 9-year old.

He knows with certainty that 1001 minus 2 is 999. But he does not know how to get the algorithm to make that happen.

If I have to choose one of those two—(1) Know the correct answer with certainty based on the values of the numbers involved, and (2) Get the correct answer using a particular algorithm, but needing paper and pencil to solve this and similar problems—I choose (1) every time.

But we don’t have to choose. We need to work on both.

This entry was posted in Curriculum, News, Opinion, Talking math with your kids and tagged algorithms, ccss, common core, subtraction. Bookmark the permalink.