What Makes a Pattern?

@Trianglemancsd My daughter learned at school that the core unit of a pattern has to repeat at least three times to be a pattern. Do you agree?

The reason this particular question came my way is that I’m working on the next book, which will be about patterns and have the same spirit as Which One Doesn’t Belong? and How Many?

In the coming weeks, I’ll work out some of the relevant ideas in this space. I invite you to play along in the comments, on Twitter, and by using anything I share here and reporting back (If you’d rather keep your ideas, critiques and wonderings private, hit me up on the Ab0ut/Contact page).

First up, I need to share a bit of research.

Young children are able to succeed on a more sophisticated pattern activity than they are frequently encouraged to do at home or at school.

This is an important conclusion of some recent research [paywall], and it matches the kinds of findings that are common when researchers look seriously at the mathematical minds of young children.

Here’s what that claim means. There are two types of tasks that young children frequently encounter when working on patterns:

The researchers argue that you can successfully complete these tasks without actually engaging in any kind of mathematical thinking.

Similarly, I get into the rhythm of “blue, red, blue, red” and continue the pattern without ever explicitly dealing with the repetition of “blue red” as a distinguishing feature of the pattern.

That’s the less sophisticated patterning work that children encounter at home and school. So what are the more sophisticated tasks they can be successful with?

Make my pattern in a new medium

I make a red-blue pattern just as before, but I give you things other than red and blue tiles. I ask you to make a pattern like mine. Maybe they are different colored tiles; maybe they are also entirely different objects. Either way, you cannot just match my pattern; you have to notice the structure of the pattern and reproduce that structure with new materials.

Make the smallest possible version of my pattern

I make a tower of red and blue cubes, and I ask you to make the shortest tower you can that still has my pattern. This task also forces you to notice the structure of the pattern rather than simply matching the original.

Before I read this research article a year ago, the book’s working title was What Comes Next? and I was struggling a bit to make this question have multiple correct and meaningful answers. The current working title is What Repeats? and I’m having quite a bit of success generating conversations with images such as the following.

What patterns do you see in each image? What repeats, and how?

(A careful reader may notice that I never answered the original question. That’s because I’m still thinking about it.)

In an odd and interesting turn of events, I find myself sitting at MSP waiting for my flight to Washington, DC to attend Discovery Education’s second Beyond the Textbook conference.

The invitation arrived by email out of the blue about a month ago. I recognized the conference from Audrey Watters’ participation last year, but was very unclear on how they found me.

The reply (edited mostly for length) came from Steve Dembo:

I believe real innovation comes from cross-pollination.  I’m a big believer in the Medici effect, which is why I want as diverse a group as possible…It’s not an easy task by a long shot and I spent days researching people outside the folks I know personally or by reputation already.  I don’t know the exact path that led me to you, but I did spend a lot of time finding one person I respected, someone like a Dan Meyer for example, and then searching through the people he followed on Twitter and that he referenced on his blog.  And from those people, I’d do the exact same thing, looking both for ‘influencers’ as well as people who I thought had interesting ideas that might make a meaningful contribution to the conversation.

So where do you fit in?  You used to be a middle school teacher and we’re going to try to key in on 7th grade.  You’re a professor and have a background in curriculum design already.  And most importantly, people that I trust and respect, trust and respect you.  And I refused to hold your Spartan connection against you (I’m a Hawkeye).

That’s impressive. I have certainly met a lot of people who claim to use social media to do something besides communicate directly with their audience. But this guy is clearly the real deal.

As I think about the upcoming two days, I find myself thinking about the idea of a textbook.

I suppose the category of publishing into which Connected Math fits is Textbook, but I don’t really think of it that way.

It has been years now since I abandoned textbooks in my math courses for future elementary teachers.

And I am designing a new Educational Technology course at my college this semester, which I will teach in the fall. I began the formal planning for that course by digging into a couple of the publisher texts for these courses.

I lasted about 15 minutes before abandoning that part of the work.

Then I read Mindstorms and found a text that I could use to introduce major ideas in the course.

So for me, it is important for us to remember that going “Beyond Textbooks” does not have to mean abandoning books, nor texts.

For me, going beyond the textbook means identifying the resources necessary for introducing the material students need to grapple with, and to support them in their efforts.

My students would be happy to tell you that I have not found this perfect set in any of my courses, and that some of my courses are in better shape than others. But none of my students (I hope) would claim that they are bored by the text materials on offer, or that the courses based on these materials consist of regurgitated second-hand knowledge.

So as we think about moving beyond the textbook, let’s celebrate the possibilities for student engagement and the liberation of students’ minds. But let’s not forget that texts and books are resources for building knowledge and questions.

In late developing news, Frank Noschese showed up with Heads or Tails Double Stuf Oreos as a gift. Good man. 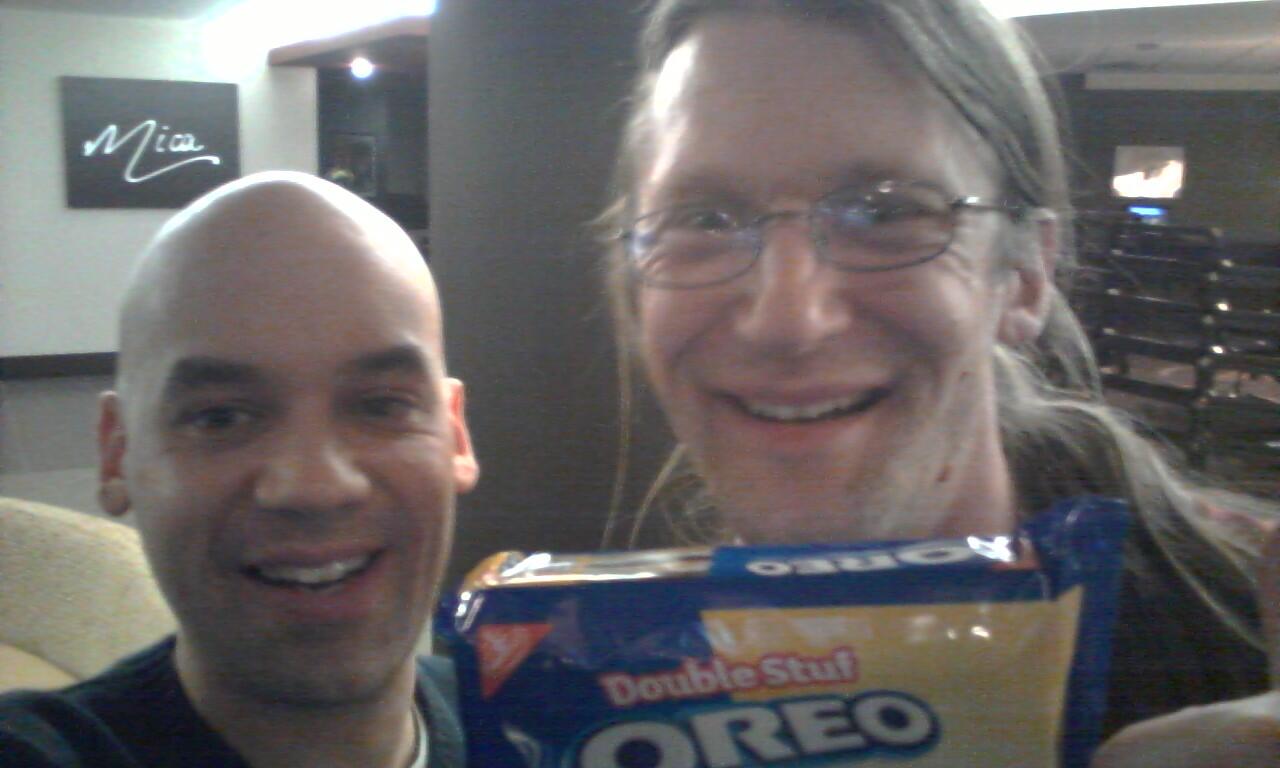