“Multiplication is just repeated addition.” Explain why this statement is false, giving examples.

Now this is when things get sticky.

It is a strong and presumptuous claim to say what an idea is.

In recent years, I have come to an understanding of why repeated addition is not the strongest foundation on which to build the idea of multiplication. But that is a far cry from making claims about what it is.

You see, any rich enough mathematical idea has multiple meanings. What is subtraction? Is it the inverse of addition? Is it the distance between two points on a number line? Is it takeaway? Subtraction is all of these, sort of.

And what is a fraction? The only definition of a fraction that is good enough to withstand the test of time and mathematical scrutiny is that a fraction is an equivalence class resulting from the equivalence relation,

if and only if

Is that what a fraction is?

I suspect that my answer may vary from some others out there. (Although perhaps it will not.)

These are related structures but they are different.

Multiplicative structure is captured better by this idea:

means A groups of B (I am pretty sure I first ran across this particular characterization in Sybilla Beckmann’s textbook for math courses for elementary teachers). A, in this interpretation, is expressed in one unit. B is the unit rate (things per group). The product is expressed in a third unit.

This difference shows up in the following conversation between a mom and her daughter as they count the number of things in this array of meatballs. 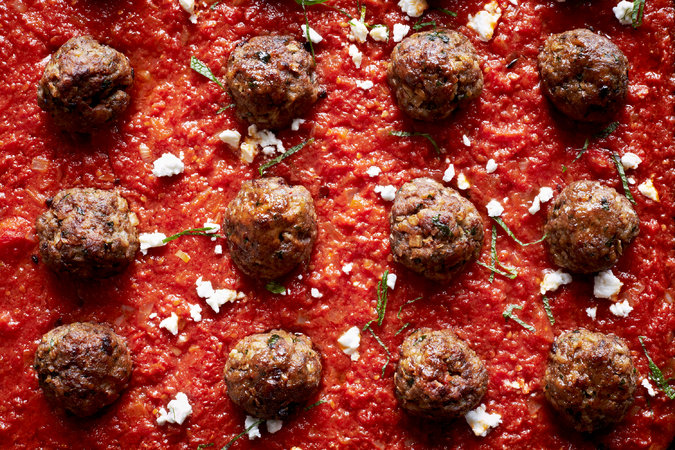 Image from The New York Times.

She asked me to count so she could show me how. I counted 4 across the top and 3 down the side. “See, Mommy! You’re counting the corner one twice.”

Why do we count the corner one twice in this scenario? This seems to violate a fundamental principle of counting—one-to-one correspondence. One number word for each object, and one object for each number word.

Much, much more on arrays in many places in my writing. Especially these:

Beyond the textbook wrap up (or What does this have to do with mathematics?)

Twister (on sister site, Talking Math with Your Kids)

Beyond the Textbook wrap up

What does this have to do with mathematics?

I had a question at the beginning of the day on Thursday, which I shared through Twitter.

The question got louder in my head as the day progressed. From my perspective, a tremendous amount of time was being invested in designing the platform for a mathematics textbook-of-the-future while not very much evidence was being presented that any of our work reflected knowledge of mathematics for teaching.

My worry continued to deepen that we were designing a better platform for delivering Khan Academy content.

Considering that my critique of Khan Academy has nothing whatsoever to do with the platform, and everything to do with the pedagogical content knowledge of the instructional designer, this was fast becoming a problem.

So I sought out some sympathetic ears in a lull in activity. I hit Frank Noschese and Chris Harbeck with a vulgar version of this question: What in the world does this have to do with mathematics?

Angela Maiers took me up on this question by arguing that, essentially, Mathematics has nothing to do with this, and that’s the way it should be.

In the end, it turns out that the two of us had very similar concerns. An example helped to bridge the gap. That example follows.

We can use multiplication to count the water bottles in this photograph because they are arranged in an array—rows and columns.

But many children do not count things this way.

We can know this by observing children as they count. It is quite common for children to count an array by circling around the outside, or even in a seemingly haphazard order. Even very skilled counters may not notice the unique structure of an array.

If they do not notice this structure, they cannot use it.

If they cannot use the multiplication structure of an array, they miss out on an opportunity to use arrays to develop the commutative property of multiplication. One view of the array below is as five groups of three. The other is as three groups of five. The array makes those groups for you, and it suggests that a groups of b will always be the same as b groups of a.

The array support the general argument that a•b=b•a for all whole numbers.

How many shoes? (Credit to my student, Marissa Brown, for the photo. She submitted it for a class assignment.)

And again, the deep connection between (1) multiplication, and (2) the structure of rows and columns suggests a more general argument.

There was nothing special about 4 rows, nor about 3 pairs, nor about the fact that these were pairs. Anytime we have A groups of B groups of C, we can compute either (A•B)•C or A•(B•C).

That is the associative property of multiplication.

But what can we use this property for? What good is it?

For one thing, it’s good for mental math.

And Javier, in an IMAP video, uses it to figure 5•12. Go there and watch for it.

Did you catch his implicit use of the associative property?

Use the associative property twice:

This is about number sense; it’s about the numerical relationships that form the heart of mathematics.

But it’s also about the inner working of paper and pencil computation. Let’s say you want to multiply 35×16 by the standard American algorithm. Then you would, at some point, say to yourself “3 times 6 is 18”. But that 3 doesn’t mean 3. It means 3 tens. The fact that you can treat it as a 3 is due to the associative property of multiplication.

Division, by contrast, is not associative. (a÷b)÷c is not the same as a÷(b÷c). This explains why we do not operate digit by digit in the standard long division algorithm.

There is much, much more.

Contrast with what Sal Khan has to say about the associative property of multiplication.

Khan knows this property. But he does not know (1) that an array is an important representation that can help to establish this property, (2) that children need to be taught to see the multiplication structure of an array, (3) that—at 1:55 in the video—he is using the associative property to do the computation 12•30.

Et cetera, and on and on.

And—to be frank—if Discovery Education doesn’t have someone paying extremely careful attention to all of this throughout their beyond-the-textbook writing process, they’re not going to produce something that will have an impact on mathematics teaching and learning in this country.

But if they do? Perhaps the sky is the limit.

I have been through a brainstorming/prototyping process before that was very much like Thursday’s session. That other one didn’t have the same attention to the possibilities of electronic student materials that this one did. If Discovery can get both parts of this right, they could create some exciting stuff.

I believe they want to do that. I really hope they can.