So much bad data representation wrapped into a single image. Make sure to read the fine print!

Reflecting over a circle

If you’re reading this blog, you probably know something about reflections in geometry. You have a point (purple in diagram below) and a line (solid). If you reflect the point over the line, you get a new point (orange) on the other side of the line, the same distance as the original point. The segment connecting the two points (dashed) is perpendicular to the line of reflection. (Link to live graph.) 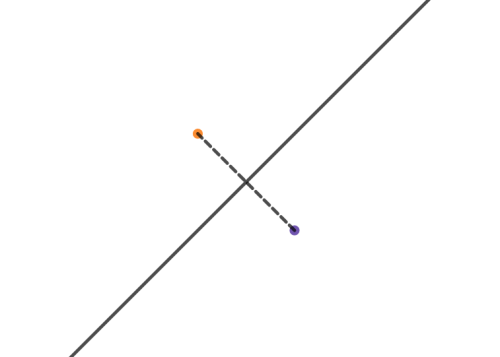 What if you reflect over a circle? I played today with the circle I understand best—the circle of radius 1, centered at the origin.

You still want the line segment to be perpendicular, which is tricky enough. But distance gets messy. Reflecting over a line means taking everything on one side of the line and matching it to something on the other side. Easy to do with two half-planes.

Whether infinity and zero match up is open to interpretation and not important right now.

Go play with the graph. Move the orange point around and start to get a feel for the relationship between the original and its reflection.

Now we’ll do two points and connect them with a straight dotted line segment. Each endpoint is reflected in the circle. (Play with it here.) 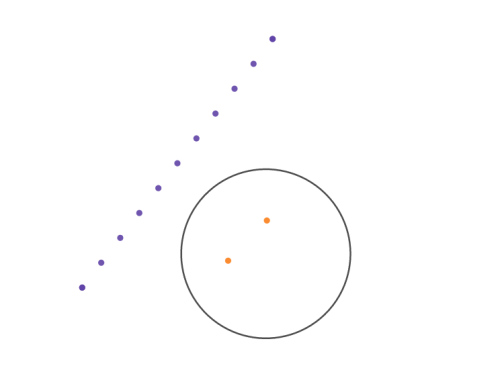 What does the reflection of the in-between points look like?

Imagine it. Sketch it. Then go see.

Please don’t solve this problem for me

I’ve been reading Tracy Zager’s Becoming the Math Teacher You Wish You’d Had. (Full disclosure: Tracy is my editor at Stenhouse, which published Which One Doesn’t Belong?)

In Chapter 3: Mathematicians Take Risks, Tracy invites us to follow her lead and take a risk in a manner similar to a student she documents in a classroom vignette. She suggests that we play with 10. I liked the idea, but was feeling pretty tapped out on risks related to 10, having explored that territory in great detail and complexity over the last ten years. So I read on with Tracy’s challenge in the back of my mind.

In a seemingly unrelated episode, Tabitha (9 years old) was doing some homework this week and needed to know the product 7 times 8. Spouse was offering a hint: It starts with a five. I asked Tabitha if she knew what 10 sevens is, which led to her expressing 7 x 8 as 70 – 14.

The next day I was thinking about Spouse’s hint. It starts with a 5. What math might there be in that relationship? Could I develop a way of knowing what a product starts with?

With Tracy’s voice in my head, I took a risk. I now take a bigger risk by sharing my ideas with you.

THE RULE FOR EIGHTS

11 times 8 starts with an 8, though. If you look more deeply, you’ll notice that the difference between the tens digit (what the number starts with) and the multiplier increases by 1 for every group of 5 in the multilplier.

The opposite rule applies to twelves. Every five twelves, you need to ADD an extra unit to what the number starts with. 13 times 12 starts with 15 because there are two groups of five in 13.

There are exceptions. 25 times 8 has me stumped. It should start with 19, but does start with 20.

THE RULE OF SEVENS

This is much more complicated. You can get a good approximation by counting groups of 10 in the multiplier and adding three to the difference between starting digits and multiplier for each group of 10. But you’ll get a lot of exceptions.

The failures seem to be predictable, though. So I’ll press onwards.

I haven’t yet decided whether 7 is different and difficult because of its 7-ness, or because of the fact that it’s 3 away from 10. The three for every ten bit makes me think it’s probably the threeness of seven that matters rather than the sevenness. But I don’t know that yet.

Please don’t answer these questions for me. They are mine. Explore them if you find them compelling. Don’t spoil my fun.

Muffins, math, and the lies we tell about both

I made my favorite pumpkin muffins this morning, for the first time in quite a while, but I made them differently today.

The recipe calls for one cup of pumpkin from a can. A can of pumpkin contains about a cup and a half, and what are you gonna do with an extra half cup of pumpkin? So I always put in the whole can.

Today however, I was using pumpkin from the freezer. Last fall, I turned a couple of pie pumpkins into pumpkin puree and froze it for exactly this purpose. The bag of pumpkin puree I was working with contained two cups. So I made two batches, using the prescribed one cup per batch.

They are good, but they are not quite as good as the ones that have a cup and a half of pumpkin.

If you spend any time baking, you will surely run across claims that baking is different from cooking. Baking requires more precision and following of directions than other types of cooking, you’ll be told.

Similarly if you spend any time learning math, you will surely run across claims that learning math is different from other intellectual activities. Learning math requires precision and following of steps, you’ll be told.

These are lies. My deliciously moist pumpkin muffins prove that this is so.

This is what I love so dearly about Eugenia Cheng’s book How to Bake Pi.. She writes that in both math and baking, decisions have consequences. Sometimes these consequences are undesirable, such as bread that doesn’t rise or arithmetic that is inconsistent.

In math as in baking, you need to follow instructions carefully in order to achieve the known result. If I want muffins that are exactly like the ones in the original recipe, I need to use one cup of pumpkin. But here’s the secret we don’t let you in on: If I use the whole can of pumpkin, I will still get pumpkin muffins. They will be different ones, but they will still be pumpkin muffins.

The difference between baking and math is that you nearly always see the natural consequences of the decisions you make, while we structure most people’s experiences with math in ways that hide those consequences.

If you leave out the sugar, your muffins will not be delicious. They may have structural problems as well. You notice these consequences and you tend to try to figure out what went wrong.

If you claim that

, the only consequence is that someone else tells you that you are wrong—whether teacher, tutor, or back of the book. In Cheng’s book, she describes treating math exactly like baking. She pushes her students to consider the natural consequences of their claims. If

, then there are going to be lots of troubles later on.

Go read her book. Then make some pumpkin muffins. And please don’t listen to Chris Kimball; the man is a total killjoy.

I have many wonderful books to recommend.

Not least my own. If you’re reading this and do not own a Teacher Edition for Which One Doesn’t Belong? I need you to fix that situation before reading further. Because clearly you’ve found value in the words and ideas on this site, and the book is a better, more focused version of those ideas.

But I’m not here today to push my book. No, I’m here to get another thing on your reading list. First a prelude.

People (well some people, who are not me anyway) like to carry on about differences between elementary school math and high school math. When they do, they fall into one of two camps.

That these two make opposite assumptions about elementary math, and also about secondary math should suggest to us that people are just choosing to look at things from a perspective rather than describing the true nature of the discipline.

Aside…true story: I once spoke at length to a producer at a semi-famous radio show as she did background on the question How Much Math Should Everyone Know?  20 minutes of conversation before it became clear that this person hadn’t read the SMP. Andrew f-ing Hacker was going to be on the program assailing the state of mathematics teaching in this country and the producer hadn’t read the Standard for Mathematical Practice. I was livid. But back on task now…

An important thing to know about the Standards for Mathematical Practice is that they pertain across all levels of mathematical activity. These are K—12 standards, but they describe the kinds of activity that distinguish math as a discipline.

When I wrote about the Standards for Mathematical Practice on this blog, and in the Dummies book, I took the easy way out. I addressed their spirit without going into all eight of them in depth.

But I’m here today to tell you that Mike Flynn has taken the high road and done the much more challenging job of treating each of these standards right.

Flynn structured his book Beyond Answers around the Standards for Mathematical Practice—one chapter per standard. He illustrates each with a vignette from his own life demonstrating the utility of the practice in his own daily life, with vignettes from classrooms, and with clear writing demonstrating the very real and important mathematical work of which young children are capable.

Ultimately, my own critique of the SMP was about them being too numerous to remember, and about them overlapping in ways that make it difficult to communicate their individual importance. I still have those critiques. Flynn doesn’t convince me (nor does he try) that this is the perfect set of such standards. But he doesn’t need to do that.

These are the standards we have. They resonate at all levels of mathematical activity, and in Beyond Answers, Mike Flynn shows convincingly that young children’s mathematical work is not fundamentally different from that of older students. Mathematics as an intellectual discipline is alive and well.