Ben Alpert from Khan Academy responded to my open letter to Sal Khan and provided a link to an improved set of decimal exercises.

My major objections now boil down to pedagogy, on which point I understand that I will make no progress with Khan Academy, so I won’t make the effort. I’ll leave that to Frank Noschese.

If you accept that people learn mathematics by doing lots of multiple choice exercises, then all I have left are technical details.

See, here’s the thing. Teaching requires a mix of knowledge and assumptions on which to base decisions. When everything is pre-programmed, deeper knowledge is required in order to create meaningful instruction, not more analytic data.

Carnegie-Mellon is working on a deep model for diagnosing student misconceptions with decimals [pdf] (and presumably many other domains). Again there’s the pedagogy thing, but I am impressed with the effort to build a solid theoretical foundation for their work. Here is a sample of a taxonomy of decimal misconceptions they have developed. 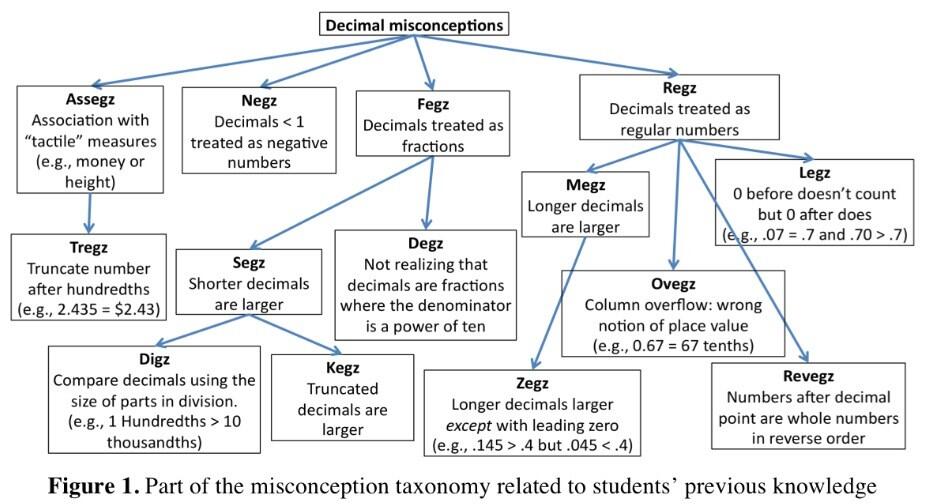 Thanks to Frank Noschese for the find.

Without that deep knowledge base, all that’s left are assumptions. Which is fine, as long as the assumptions are not flawed.

7 responses to “This is better”