It is perhaps not widely known that I love good Mexican food, and that—with the assistance from afar of Rick Bayless—have developed a number of specialties de casa.

Among these specialties is tostadas, which I make starting with corn tortillas. A bit of oil and 10—15 minutes in the oven makes them crispy. We build from there.

The tortillas fit nicely in a 3 by 3 array on my favorite cookie sheet. There are four of us in the family. You can see where this is going, I am sure. 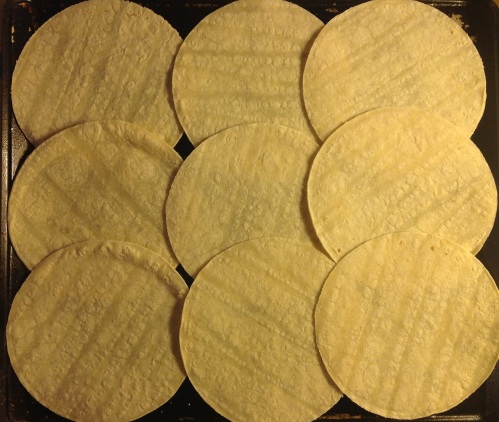 Griffin served himself a second tostada the other night.

Tabitha (six years old): Griffy’s having another one?!?

T: How many did you make?

T: That’s not a fair number!

Me: What would be a fair number?

T: One where everybody can have the same amount.

Me: Right. But how do you know 9 isn’t a fair number? And what would be one?

Me: Oh! Forty! Then we could each have 10. Would you like to eat 10 tostadas, Tabitha? But then I would need to buy a second pack of tortillas.

T: [Silent, but her eyes get big and she nods vigorously.]

The final count is 2 tostadas each for Mommy and Tabitha, and

tostadas each for Daddy and Griffin. Along the way, I promise Tabitha a taco if she finishes her second tostada and is still hungry. This strikes her as fair.