My wife began a tradition that she now regrets. After turning out the lights in the kids’ shared room at bedtime, she would tell the children to picture something in their minds. This was typically a soothing or amusing scene related in some way to the days’ events.

As time has passed, the picture has become more elaborate, the children’s expectations higher. Tabitha in particular can be demanding. I was told the other night that the picture I provided was not long enough, for instance.

Most of the time, when it’s my turn to provide the picture, I begin to speak without a clue what the resulting image will be. Sunday was one of those nights.

Me: Picture that you are riding in the car and you come to a sudden stop because there is an elephant parade. A very long one consisting of 27 elephants marching one directly behind the other. 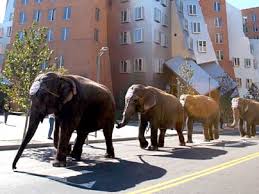 Now…the strange thing about this elephant parade is that each elephant is a bit smaller than the one in front of it, and each one has an additional leg.

Like I said, the pictures have gotten elaborate and expectations are high. Also, I mentioned that they are not preplanned, right?

So you sit in the car watching this very strange parade go by. Picture that.

Griffin: (8 years old) How many legs does the last one have?

Let’s pause for a moment. This was his question, not mine. Real world be damned, this is a habit of mind thing.

The number of legs on the last of the fictional elephants is not a number that matters in any way. Griffin’s intellectual need arose from narrative. This is a stupid story, but a story nonetheless. Number is the driving force in the plot and the boy wanted resolution.

Me: Oh. Good question. Lemme see…The first elephant has 4 legs. Then 26 elephants later is 26 more legs, so 30 legs on the last one I guess.

G: Yes! I knew it! [fist pump under the covers]

8 responses to “Picture this”