What? You think my reductio technique is sloppy?

You object to my introduction of the Triple-Double when it wasn’t stated in the set up of the proof? You think that chocolate filling is the problem and so you question my results?

You have a point on that first count. But the second count? Come on! Seriously?!? The calorie count of a chocolate filling is gonna be substantially different from that of a vanilla filling? Please.

Go check the Nutrition Facts on Vanilla Oreos, and then we’ll talk.

While you’re driving to the grocery store (or walking to your pantry), here’s some more data.

I solved the regular/Triple-Double system and concluded that each wafer weighs about 1.7 grams and each unit of stuf is about 8 grams.

And that means the Oreo below is not a duoseptuagenuple stuf Oreo, Doc Blades’ claim notwithstanding. Nope, that bad boy isn’t any better than unopentuagenuple. 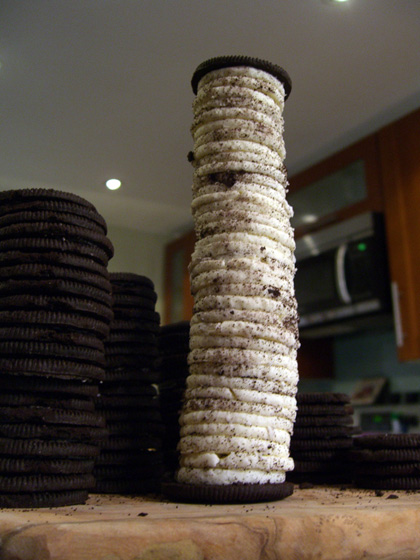 Man do I wish I had taken this photograph!

UPDATE: I corrected “vanilla filling” to “chocolate filling” in paragraph 3. Also, further objections (beyond those noted above) have been raised in the Twitterverse. I’ll update these in a new post shortly.

Meantime, y’all know how to comment on a blog, right?

This entry was posted in Problems (math) and tagged groceries, oreos. Bookmark the permalink.

7 responses to “My Oreo manifesto, part 3”