No one has demonstrated this more frequently and more convincingly than Al Sicherman of the StarTribune. In his Tidbits column, Sicherman keeps tabs on prices and variations of processed foods. A favorite category for him recently has been Oreos. Writing recently on the topic of the new Peppermint Creme Oreos (which he describes as toothpastey), Sicherman says:

Whoomp! There it is! Math, baby!

Gotta love this guy. (But seriously, would it kill the Strib to dispatch a photographer with a camera that has more than 1 megapixel?)

Inspired by his example, I’m prepared to turn up the heat on Nabisco’s Oreo division. Are you ready? 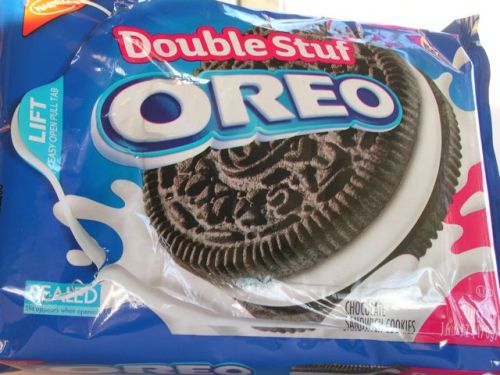 Let me say that again…DOUBLE STUF IS NOT DOUBLE STUF!

How do I know? Math.

How should we do this? Reductio ad absurdum? Let’s assume it is double stuf. Then, according to Nabisco’s own data (found on the Nutrition Facts), one serving of Oreos is 3 cookies and 160 calories. Double Stuf is 2 cookies and 140 calories.

What, you prefer the formal mathematical solution? Fair enough:

We can rewrite this equivalently as:

And then solving by combination, we get:

You’re comfortable with that. No problem, right?

Tune in tomorrow for the dénouement.

15 responses to “My Oreo manifesto”